Joliet DUI lawyer Steven Haney has handled hundreds of DUI cases.  Walk a straight line heel-to-toe, stand on one foot, and follow with your eyes the officers finger are the usual field sobriety tests requested of a driver suspected of impaired driving.

These are standardized tests, and officers go through specialized training to learn how to interpret the results. If the tests are not administered properly, or if the results are misinterpreted, you could be charged with a crime based on bad evidence. If you are facing a DUI that involves field sobriety test evidence, it is important that you seek the advice of an experienced criminal defense attorney and Joliet DUI lawyer who knows how to handle these cases. 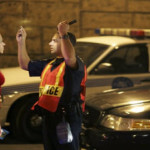 When the police stop the driver of a vehicle on suspicion of driving while intoxicated, the police officer will generally ask the driver to perform some tests, know as field sobriety tests. These tests are designed to allow an officer to detect drivers who are intoxicated.

This test has the suspect walk, heel-to-toe nine steps, along a straight line. The results depend on how well the suspect follows the instructions the officer gives and how well they execute the maneuver.

During this test, the police officer has the suspect’s eyes follow the level movement of an object. Horizontal Gaze Nystagmus (HGN) results from the involuntary movements of the eye as it looks to the sides. When impaired by alcohol, the jerking occurs at lesser angles and is more pronounced.

According to NHTSA, the officer “looks for three indicators of impairment in each eye: if the eye cannot follow a moving object smoothly, if jerking is distinct when the eye is at maximum deviation, and if the angle of onset of jerking is within 45 degrees of center.”

This test requires the subject to stand on one leg with the other foot six inches off the ground. They then have to count aloud one-thousand, two-thousand until the officer instructs them to stop. Typically, the test lasts for 30 seconds.

But How Accurate are These Tests?

The NHTSA claims the combination of tests is accurate 91 percent of the time. The problem is they are still subjective tests and some drivers who are not above 0.08 BAC may still fail them. Police officers are human, and thus can make mistakes as the tests are not foolproof.

For example, some individuals may have balance or other medical issues that compromise their ability to pass a test successfully. The SFSTs can also be influenced by the experience level of the officer administering the test.

These are all questions that can be discussed with a DWI defense attorney, because the complex interaction of the traffic stop should be reviewed in its entirety, as there may be many opportunities for a defense attorney to point out behavior that indicates a lack of impairment on behalf of the driver.

Joliet DUI lawyer, Steven Haney has helped clients throughout Will County in all types of DUI cases. He understands how field sobriety tests work and how to ensure that you receive fair treatment under the law. When you hire our firm, we will conduct a complete investigation of your case, including a review of the report that describes your results and the squad video.

The squad video provides an accurate representation of your encounter with the police. We will compare the report of the results with what is shown on the video. If we find any discrepancies, we will do everything in our power to have the charges against you dismissed. If a dismissal is out of reach, we will work to negotiate the best available outcome.

Get the Representation You Need

Contact our Joliet DUI lawyer today for a free initial consultation to discuss your dui case and learn more about what we can do to help you. You can reach us by phone at 815-723-5600 or via e-mail. For your convenience, weekend appointments are available.